Safe, risky or danger - which retirement zone are you in?

The results of our latest independent tracking study revealed that a vast majority of South African pensioners are drawing (or planning to draw) an unsustainable rate of monthly retirement income. This means they run the risk of using up their retirement savings too soon, which could lead them to become a burden in their final years.

Despite the study showing a positive increase in average savings, the actual amount saved equates to around 10x respondents’ average annual income, falling way short of the 25x figure that has been suggested by external research.

Just SA Head of Distribution Bjorn Ladewig says: “The industry drawdown rule of thumb is 4%, but the study shows a big difference in what people think they can get from their annuity savings compared to what is sustainable for life. This is because many people underestimate how long they will live (and therefore how much money they need), while some admit to not having done any retirement calculations at all.”

How much is enough?

Looking at the stated retirement income requirements from the tracking study, Ladewig says there are three possible scenarios or zones for pensioners invested in living annuities. You are either:

These zones are visually demonstrated in the chart below, which shows the FSCA’s recommended drawdown rate for living annuity holders as a blue line. The pink line is a guaranteed rate from a life annuity, which on average is around 2.5% higher at retirement and increasing with age. 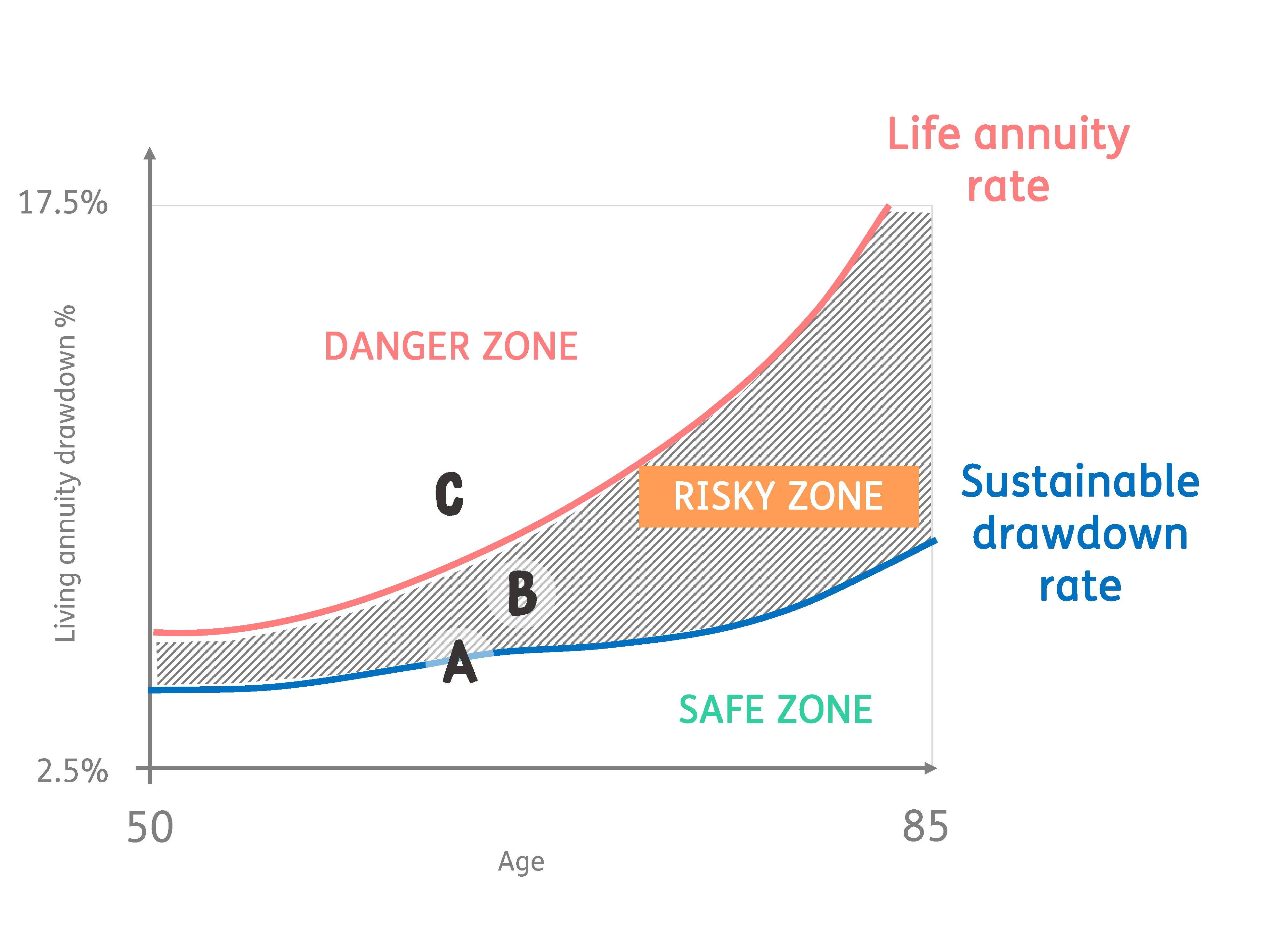 How your drawdown maps to an optimal retirement income solution

Based on these scenarios, Couple A is safe (for now) within a living annuity solution, with a sustainable drawdown rate of about 4%. However, if they need to increase their drawdown later, or they live longer than they expect to, their risk of running out of money and becoming a burden on their dependents increases exponentially.

At the other end, Couple C are drawing at an unsustainable level, and can reduce uncertainty by securing a guaranteed monthly income for life by switching from a living annuity to a life annuity solution. They may also need to re-budget and adjust their income to within their means as a result. However, by switching to a life annuity, they can significantly reduce their investment and longevity risk and secure an income, for life, to at least cover their essential expenses.

Couple B are needlessly drawing an unsustainable rate from their living annuity and could reduce their risks by considering a blended annuity solution. A blended annuity will allow them to create a safety net and guarantee a portion of their income by investing part of their capital in a life annuity portfolio. The remaining portion could remain in a living annuity, enabling them to use this for discretionary spending or to leave a capital legacy

While not in trouble (yet), Couple A could also benefit from a blended annuity solution as a diversifying asset class.

Historically, the lack of flexibility offered by life annuities has swung pensioners in favour of living annuities. However, the longevity risks associated with pure living annuities have not yet manifested as these investors are only now moving beyond their average life expectancy. Just SA’s study reveals that flexibility is fast becoming less important, with effects of the pandemic, rising inflation and poor markets serving as catalysts to shift pensioners’ mindsets to wanting certainty.

Do you need more information?

Consider seeking advice from a qualified financial adviser. Contact us to request the details of an adviser in your area or to find out more about our offering.