Women save and plan more for retirement, reveals retirement study

Report highlights the importance of retirement planning to reduce uncertainty 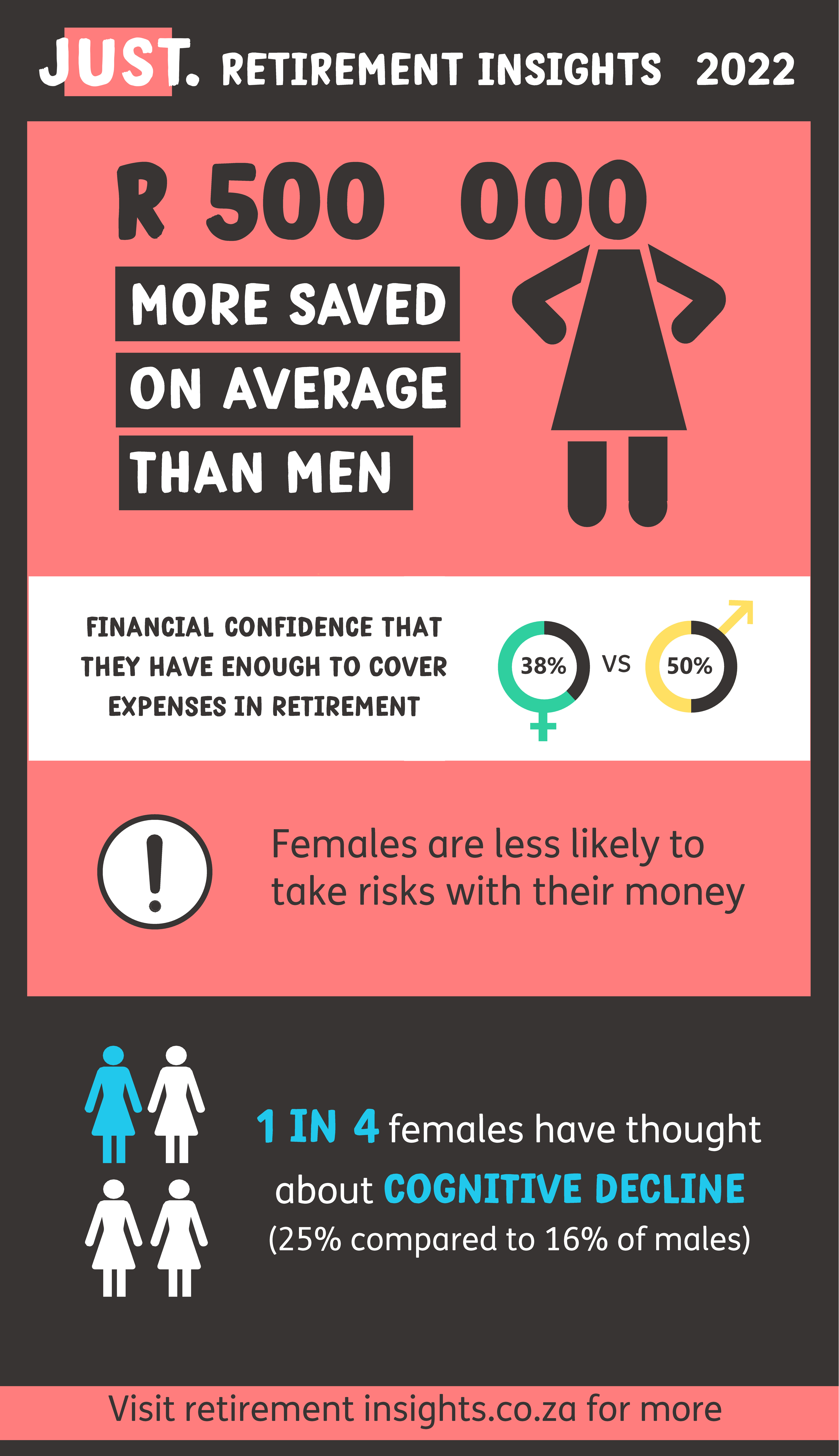 The gender gaps in financial literacy and retirement readiness across the globe have been extensively publicised, with women supposedly lagging behind men in terms of their financial-know-how. Yet, in a new research report from retirement income specialist Just SA, South African women claim to have saved more on average than their male counterparts by almost half a million rand.

They are also putting more thought into retirement planning than men, according to the study, which surveyed South Africans over fifty years old, in or approaching retirement. Results revealed that around one quarter of female respondents have thought extensively about their potential cognitive decline and have made proper plans to protect their financial future, compared to just 16% of men.

In South Africa, over a third of households are headed by women, who often singlehandedly support their families.[1] It is perhaps unsurprising then that female respondents claim to be more unlikely to take risks with their money (33%) compared to men (21%). And while around half of the men surveyed said they were confident they have enough money to cover their expenses in retirement, only 38% of women felt the same way.

Heather Bell, Business Development Manager at Just SA says: “It is positive to see women taking strides to improve their financial literacy and independence and being able to make greater provision for retirement. However, the results of Just Retirement Insights 2022 also reflect an overriding feeling of uncertainty from female respondents regarding their retirement future. For example, a quarter of female respondents confirmed that they cannot afford to lose any money in a market crash.”

According to Bell, women typically face additional gender-related pressures as they head into retirement, such as less time and income to save, as well as a longer life expectancy.

Women live longer, but underestimate by how much

Just SA’s internal statistics show total life expectancy for a 65-year-old in South Africa to be 87 years for women as opposed to 82 years for men, with 25% of women at age 65 likely to reach 94, and a further 10% living to celebrate their hundredth birthday. Bell notes that this increased longevity makes women more susceptible to degenerative diseases, while increasing their chances of becoming a financial burden on children in their late stages of life.

The case for life annuities

A practical way to tackle uncertainty in retirement is through informed retirement planning with an independent retirement expert who is able to assess your individual circumstances and make suitable recommendations based on your unique needs.

“A life annuity provides greater certainty in retirement because it provides a secure, guaranteed income for life that will never decrease, says Bell. “For retirees that are married, a joint life annuity will continue to pay the annuity income for as long as either spouse lives. This additional insurance allows retirees to plan to cover their essential expenses for the remainder of their lives together and beyond, while also providing some peace of mind that neither will become a burden on their children in the unfortunate event of one passing away. ”

“It’s important to understand your options at retirement and make sure you are taken care of one way or another,” concludes Bell. “While having a plan is a good start, at Just SA we recommend that you add some protection to that plan using a life annuity.”

Do you need more information?

Consider seeking advice from a qualified financial adviser. Contact us to request the details of an adviser in your area or to find out more about our offering.